Moments like this are a reason Joanne loves food: it has the power to bring people together. Lebanese recipes such as this za’atar man’oushe hold a special place in her heart — they are the dishes her mother and teta (grandma) would make when she was growing up.

“Food in Lebanon is something very important,” Joanne explains with a smile. “There is food we serve when someone is born, then there is food for your first tooth, and there is coffee every time you have a visit. If you want to welcome someone you welcome them with lunch or dinner. It is very meaningful, and all the old folks, they stuff you with food!”

“There is food we serve when someone is born, then there is food for your first tooth, and there is coffee every time you have a visit. If you want to welcome someone you welcome them with lunch or dinner. It is very meaningful, and all the old folks, they stuff you with food.”

But the wonders of Lebanon’s traditional cooking is at risk of being lost. Not only are traditional dishes time consuming to make, but more young people are moving to the city at an early age, living alone before they learn how to cook from their elders.

Joanne’s innovation, Foodie on a Mission, has an answer. Started as a food blog at the end of 2017, Joanne has since used her passion for food, her technology and design skills, and her background working at a television station to bring Lebanese cuisine to life through video and photo and DOT helped enable that courage: “that was when I realized this project should be taken seriously and it cannot just be a hobby,” she says. 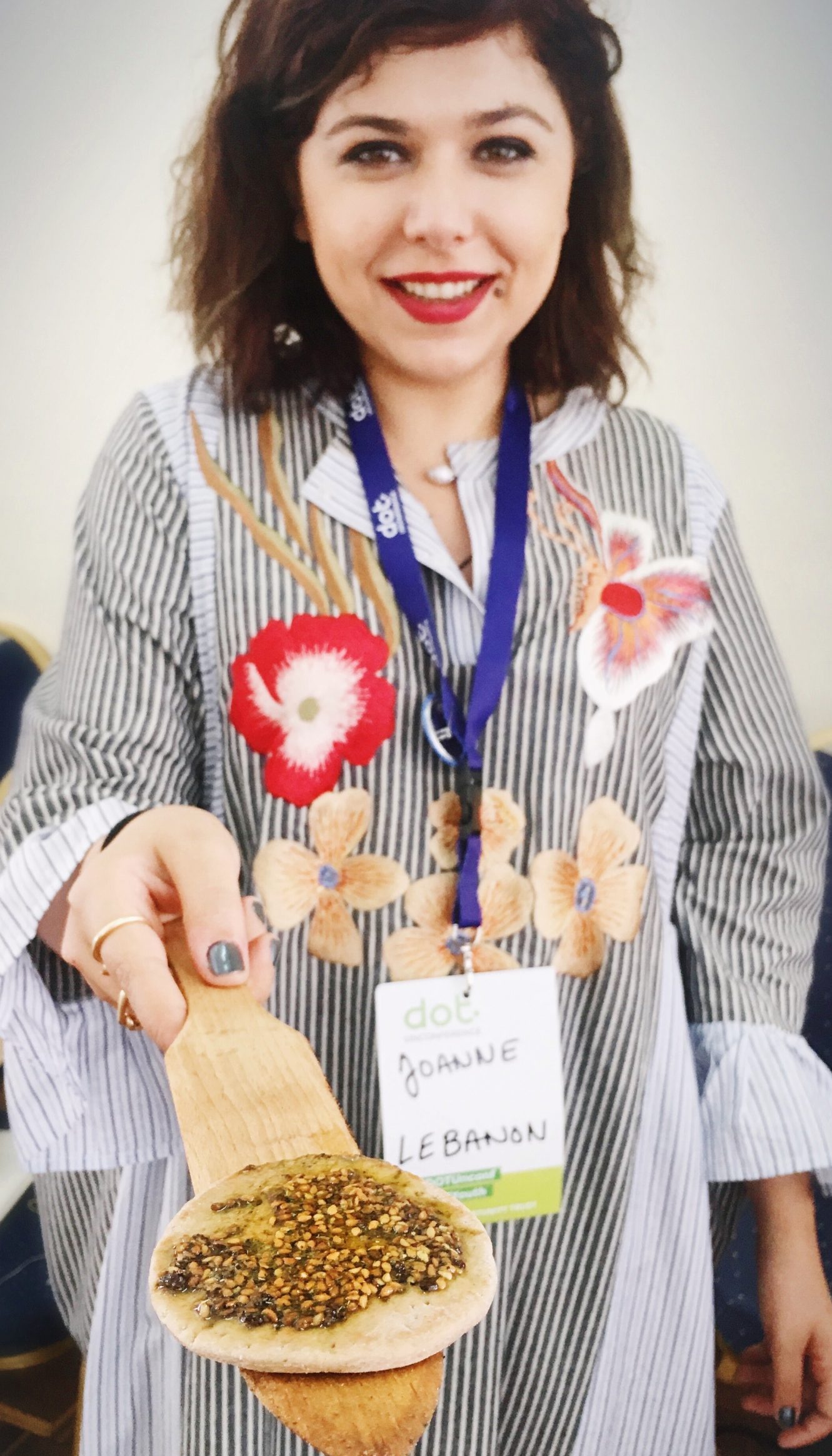 Joanne officially launched Foodie on a Mission’s video series at the start of 2018. Not confined to her own kitchen, the videos are filmed, designed, and edited by Joanne. Each features an elder in a different part of Lebanon. “Foodie on a Mission gives you that nostalgia and I wanted a really good recipe, so I knew I had to go to the grandmas,” she says.

In one of the first videos, an elder shows viewers how to make zlebe and ouwaymat, two famous Lebanese deep fried sweets traditionally served during Epiphany. Another features Joanne’s very own grandmother making makhlouta, a hearty, vegan soup with a mixture of ingredients like lentils and beans. “Every family in Lebanon makes the dish their own way, whether it is with the spices or something else,” Joanne says of the recipes. Through her Facebook page, some of the videos have gotten as many as 25,000 views.

“When I visit the tetas, some of them are complete strangers. But still, she hugs me and welcomes me into her home. They make you feel like you are their grandchild. They say ‘stop filming now and eat,’” Joanne laughs.

When filming the Foodie on a Mission videos, Joanne realized she needed another side to the innovation. “That is why I created Hidden Crumbs: to highlight people making traditional products and ingredients,” she says.

Hidden Crumbs is an online marketplace that sells the products of these food producers with Lebanese and international customers. This, she says, helps people in villages who may not be that digitally active take advantage of e-commerce. Joanne buys the products at market price and uses her keen eye for food and design to create small, themed kits. That includes a coffee making kit, and a kit for Yerba matte, a South American tea turned traditional drink in Lebanon’s Shouf Region.

Through this marketplace, and by taking advantage of the power of social media, Joanne hopes Lebanese recipes — and all the traditions they represent — can stay alive for generations to come.

“People are in need of this heritage and link to their past. The videos are not only in Beirut, not only in their kitchen. It is in the dialect people speak — it is emotion and food mixed together.”

At DOT we’re excited to bring you inspiring stories that highlight the impact of daring young social entrepreneurs. Social entrepreneurship and social innovation is an ongoing journey, so we invite you to follow along with Joanne by following her on Twitter @joanneraad.

Are you interested in becoming a successful social entrepreneur?
Join #DOTYouth to build your digital and social
innovation skill-set.